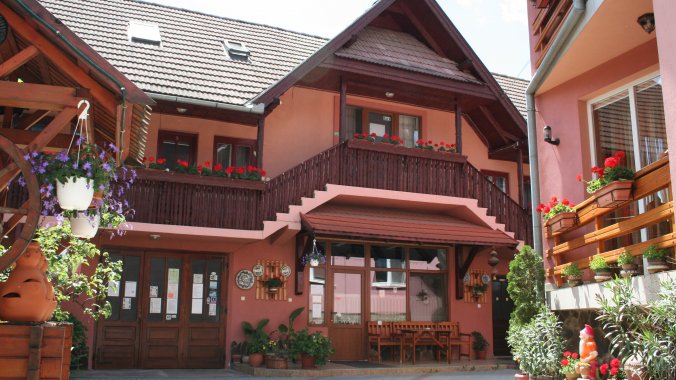 We offer a quiet and comfortable accommodation at Corund commune, around the ski area and close to the salt mine from Praid.

Reviews by real guests, who used Travelminit for booking

Ildikó
2 years ago
with family

Corund (Korond) is one of the big communes of Székely Sóvidék and Hargita contry. Its name can not be separated from the popular pottery and crockery industry. It also means the survival of folk craft, the continuation of the traditions and the welfare of the local inhabitans. The pottery industry is one of the most ancient crafts. Teleki József wrote about Korond, that: „Here each man is or potter or shingler" (Travel Notes, 1799). A diverse occupation is charasteristic to the inhabitans of this viable commune: the traditional potter's craft, the woodworking, the tinder-working, and trade (long ago by carts, today by cars). It had an aragonite mine (today a nature conservation area) and a famous mineral-water bath (today the place of the pottery fair from Árcsó).

Corund lies along the DN13A national road, at 10 km from Praid, 17 km from Sovata, 27 km from Odorheiu Secuiesc and 78 km from Miercurea Ciuc. The number of the inhabitans of the central village was of 5097 people in 1992 (from wich 4629 were of Hungarian nationality)

Corund (Korond) is the homeland of diversified mineral-water springs. On its territory you can find salty and sour mineral-waters. Its most important springs are from Árcsó, Dióvápa, Szõlõmáli, Cseredomb (Erzsébet spring). From the lukewarm mineral waters was deposited, once so famous, the semi-precious stone, the aragonite from Corund, wich was still mined in our century, too. Nowdways, the Laposlik, the Falu hill and Csigadomb (Rakodóhegy), an area of about 1,5 ha is a geological nature conservation area. Ont he territory of today's Árcsó Inn, there used to be the once so famous Korond-bath.

Corund (Korond) was first mentioned int he papal register for collecting tithes, in 1333. The arheological excavations revealed findings from the Bronze, Roman and Avar Age. Int he summer of 1831 was found the famous golden metal from Firtos, ont he plateau of the Keselyû top, under the fortress, medal, wich is the source of several legends. Probably the fortress of Ffirtos was built int he Xll-th century ont he place where in 1950 were excavated the remains of a Roman church from the 12'th-13'th century.

The soil of the village is not favourable for agriculture. The pottery, the tinder-working and woodworking represented the main sources of income. The first pottery workshops date back to the begining of the XVll-th c.

Corund (Korond) is one of the important station of the travelling. The displayed shops along the national road make the traveler stop.

This accommodation can be booked on Travelminit using tichet de vacanță or card de vacanță.